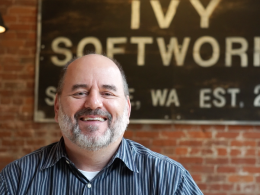 Today I’m announcing a significant addition to our leadership team - Brian Valentine! Originally a Unix & VMS programmer at Intel back in the 80s, Brian is probably best known in the software industry for building and leading some amazing teams across a truly remarkable number of products and platforms (Exchange, Windows XP & 2000, and Amazon’s eCommerce Platform, to name a few). His talent for succeeding against the impossible is surpassed only by his passion for growing people and shipping product. I’m very excited to bring him into our Innovation Studio and build great things together.

Speaking of which - the Ivy Softworks team has been working really hard over the last few months on our first product family, code-named Atlas. We’re still keeping the major details under wraps for now, but I’m excited to report that we’re on track to ship a limited beta before the year’s end! We’ll be releasing more details as we get closer to a public launch, so stay tuned. Also this year, we’ll be officially publishing more information about our unique Innovation Studio model. Expect to see the next installment of the series within the next few weeks.

And now without further ado, here’s Brian in the flesh talking about why he’s so excited to join Ivy Softworks!